Migration, exploitation and agency in the Italian agricultural sector

This article highlights the working conditions of migrant labourers in the Italian agricultural sector and discusses what kind collective action workers can take in a context of extreme exploitation and hardship. 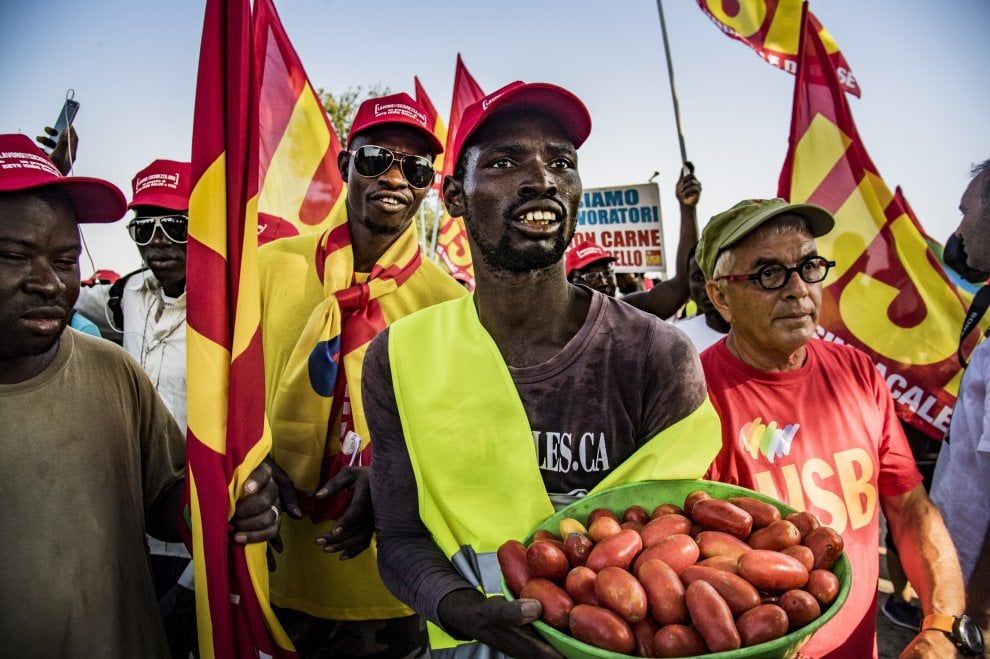 On the 8th August 2018, 2000 migrants marched from the Gran Ghetto of San Severo to the Foggia Prefecture: a 17 km walk under the scorching Italian summer sun, chanting “Schiavi mai!” (never slaves!) along the roads lining the fields of the second most extended agricultural area in Italy. The Berretti Rossi (red hats) demonstration and the concomitant labourers strike was called by the USB trade union, in response to the 16 tragic car accidents deaths that had occurred in the previous two weeks alone. Led by trade unionist Aboubakar Soumahoro, a figure recently arisen to the public's attention as the fearless voice of the migrant labourers in the country, the strike was organised to demand respect, dignity, protection and rights. It was a toxic concoction of criminalisation of migrants, lack of rights and political authorities' unwillingness to act that is at the root cause of the past summer's deaths.

The caporalato (“gangmaster system”, in English) is a criminal practice that has been plaguing Italy for many decades, but it intensified in the 1970s, when it was criminalised for the first time. Its intensification came at the time when policies aimed at deregulating and liberalising the agricultural sector were adopted at national and European level. Agriculture is the sector mainly affected by it, but caporalato is a practice also present in other industries, such as construction.The system hinges on the role of labour intermediaries (caporali) who provide landowners with labourers (braccianti) on a daily basis. The phenomenon has been witnessed and denounced in all the 20 Italian regions, but it is particularly rooted in the agricultural districts of the Southern regions. Having to live in the proximity of the fields and often illegally residing in the country, migrants have to resort to live in temporary accommodation, shacks, abandoned country farms, houses and factories, with NGOs, such as Medici Senza Frontiere (2007) denouncing the situation as disastrous, inhumane, and comparable to a humanitarian crisis. The FLAI-CGIL trade union estimates that 400,000 agricultural labourers are victims of caporalato, 80% of whom are migrants: working under this system means that an average working-day consists of 10-14 hours, paid 25-30€ a day, to which one must detract the "taxes" retained by the caporali, and the sums withheld to cover the costs of travel to and from the fields, food, bottled water and renting of a bed – if these "services" are provided at all. Estimates suggest that 62% of labourers are not covered by social security, 64% do not have access to clean water, and 72% contract serious illnesses while in Italy (Omizzolo, 2016).

Modern caporalato is intrinsic to the Southern Italian regions, as the relationship of interdependence with illegal activities, organised crime, local mafias and the agricultural sector is inextricable. The caporali often subject the labourers to criminal, coercive and violent acts, if not enslavement, maintaining the control over their labourer networks, mediating the demand-supply chain and contracting the wages directly with the landowners. In a climate of widespread acceptance of illegality in which local political authorities have generally limited possibility, or will, to enforce the anti-caporalato legislations, the caporali are increasingly considered necessary brokers in this environment. An element complicating this issue is that academic and journalistic research are limited due to the danger posed by the environment's proximity to the criminality: the sociologist Marco Omizzolo has repeatedly suffered from threats and intimidations by the mafia controlling the agricultural sector in the Latina province, and, as of 2018, he has been put under police protection.

Reporting to the police the abuses that these people face means de facto outing oneself to the authorities.

How are the migrants working in the Italian countryside, affected by the caporalato? And how do they confront the system? Since the 1980s Italy has become a country of arrival, reversing a decades-long trend that witnessed the departure of millions of Italians. Beginning with Northern Africans and Middle-Eastern immigrants in the 1980s, followed by Sub-Saharan Africans escaping the 1990s humanitarian crises, and Eastern Europeans escaping the depressed ex-communist states and the wars in the Balkans, immigrants started substituting Italians as labourers in the fields: in 2015 official figures say that in Southern Italy (including Sicily and Sardinia) there are 110,000 migrants labourers, 16% of the total regional workforce (Perrotta, 2015). Trade unions estimate however that there could be at least twice as many, who are in the country illegally. They constitute the most vulnerable class, as their "clandestine" status, or their expired residency permits force them to work without documents, job contracts and no protection from law enforcement and authorities: in fact, reporting to the police the abuses that these people face means de facto outing oneself to the authorities, running the highly likely risk of being arrested, detained and expelled from Italy. Migrants have devised opportunities and ways to leverage some power, which, far from the possibility of being hailed as examples of structured and diffuse workers' struggle, must be anyway accounted for as a set of diverse and multiple ways to redress the power imbalance in the workers' favour.

The ability of workers to reshape the mode of production in this context is constrained by a number of factors which, with reference to Lund-Thomsen's work on labour agency (2013), can be categorised as “vertical” and “horizontal”. Highlighting the institutional role in defining the labour- capital relation, the argument is that labourers' agency is limited vertically by lower prices and the "instability of availability" (i.e. labourers' supply is higher than demand, meaning that work is not guaranteed nor provided daily, and striking migrants can be easily substituted by other labourers). Additionally, the braccianti have little to no power to influence consumer behaviour at the top of the consumer chain, given the murky and extremely layered nature of the agricultural mode of production. Horizontal limitations point at the socio-political context governing the regions where caporalato is rooted: labourers are often segregated in ghettoes along racial and ethnic-national lines, geographically distant from each other and from the Italian populace, impeding the formation of a unified labour movement. This problem is accentuated by migration flows that are regulated restrictively and punitively by the Italian immigration laws, adding a further layer of difficulty. Interestingly, non-Italian caporali have increasingly become more prominent in the sector, reflecting a specific trend of indebtedness: the labourers contract debts remotely with the intermediaries to cover for emigration expenses while still in their homeland. The intermediaries are in fact already present in Italy, meaning that the ensuing strict debtor-creditor bond has a particularly strong effect on what kind of agency the braccianti can enforce.

Labour agency is usefully defined by Coe and Jordhus-Lier (2011: 213) as the “potential of workers to create their own organisations and hamper, or in some cases, overturn the demands of capital through their actions”. However heterogeneous and diverse, acts of labour agency can be categorised into three types, as originally theorised by Katz (2004): resilience, reworking and resistance. In the case of caporalato, studies have shown how labourers tend to behave differently depending on the migrant status, but one can argue that most of the agency acts take the form of resilience and reworking. For example, EU citizens have been shown to exercise agency by utilising the highly mobile status enabled by their communitarian status: EU migrants are less likely to organise collectively to demand better wages and working conditions, preferring instead to travel to other regions in pursuit of better conditions. Oppositely, non-EU migrants are heavily tied to the territory they find themselves in, opening the door for more coherent forms of action.

Within the wider approach of labour agency, the labourers' small acts of resilience and reworking must not be dismissed or underestimated.

Invisible acts of agency are found in those contexts where there is inability to challenge the capitalist mode of production: small acts of sabotage or individual bargaining with the landowners, hence bypassing the exploitative intermediaries, are not so infrequent. Visible acts of agency (e.g. the big strikes of Nardò (2011), Latina (2016), Foggia (2018)) have the potential to draw the attention of policy-makers, public opinion, trade unions and NGOs, with some of those demonstrations having enabled the adoption of stronger criminalising policies (both at regional and national level) and better working conditions for the braccianti. However, most of the acts are short-lived and, due to the many constraints, too weak to openly challenge the the system in a resistive fashion. Exemplary in this sense are the 2010 Rosarno riots, sparked by the continuous vexations and violence carried out by Italians at the expense of the migrant labourers in the province characterised by the most intense penetration of criminality in Italy (i.e. Reggio Calabria): the riots were brought to a halt by the intervention of the armed forces and hundreds of labourers were detained and expelled, with no significant change in the local socio-political and economic context. Within the wider approach of labour agency, the labourers' small acts of resilience and reworking must not be dismissed or underestimated: they should be recognised for their ability to have potential consequences for more transformative practices of resistance that, however, have yet to take shape.

On 2nd June 2018 Matteo Salvini, the Lega leader, elected in the Rosarno constituency in March, was sworn in as Interior Minister, denouncing that “The good days for illegal immigrants are finally over”: that same night a Malian trade unionist, Soumaila Sacko, was shot dead in the Rosarno countryside.