Meet the UiODoc Executive Committee for 2020/2021. You can also read a description of the positions and tasks. Margret Veltman, President
PhD Candidate at the National History Museum, Plant Evolution and DNA Metabarcoding Group. Margret is researching the impact of illegal harvesting and trade on plant genetic diversity. Partnering with the IUCN and Royal Botanic Gardens Kew, she is working on specific groups of orchids that are endangered due to systematic overexploitation. Her project is part of the EU funded network ‘Plant.ID’, and aims to develop new tools for identifying plants with molecular data. Margret has an interdisciplinary interest in combining ethnobotany, bioinformatics and conservation. She also enjoys running, yoga and the outdoors.

Michael Goul Larsen, Secretary
PhD Candidate in the Økstad Group at the Department of Pharmacy, Faculty of Mathematics and Natural Sciences. Michael’s project is revolving around the bacterial opportunistic pathogen Acinetobacter baumannii, which is becoming an increasingly bigger problem in hospitals all around the globe due to antimicrobial resistance. His research focuses on how the pathogen might circulate between Norwegian livestock production facilities and hospitals according to the One Health principles, and future plans involve delving deeper into the intricacies of bioinformatics through comparative genomics. In his free time, Michael enjoys conversation, playing the drums in a band, exercise, photography as well as honing his cooking skills. 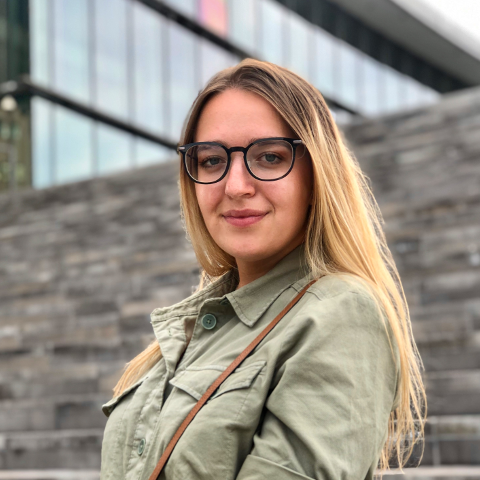 Olga Zlygosteva, Treasurer
PhD Research Fellow at the Department of Physics, Faculty of Mathematics and Natural Sciences. Olga is a part of a PROCCA convergence environment – an interdisciplinary project aiming to create an excellent platform for collaborative efforts in proton therapy in Oslo. She is working on in vitro and in vivo assays for biological radiation responses of normal tissue models as well as on radiation dosimetry. The main interest is to understand the differential mechanisms due to biological responses from proton and X-ray irradiation and how biological short- and long-term side effects of radiation therapy can be reduced. She likes running, dancing, reading and traveling.

Erling Agøy, Events Officer
PhD Candidate (4th year completion grant) in the Chinese studies working group at the Department of Culture Studies and Oriental Languages. Erling's research concerns the human impact of climate change in 17th century East China (Jiangnan). Specifically, he uses historical sources to study the impact of climate change on developments and local society (e.g. the Manchu invasion), what people did to adapt to the changes and how the climate was perceived during this period of cold and unstable weather during the later phase of the Little Ice Age. He has much experience organising events of different many kinds, both in a work setting and more importantly through volunteering. Outside of work, Erling enjoys travelling, hiking and writing. Lasse Keetz, Events Officer
PhD Candidate in Climate and Vegetation Dynamics at the Department of Geosciences in collaboration with the Natural History Museum. Lasse is using computer models to study how plants and the climate interact and what this might mean for a warming planet. His main motivation for this work is to learn more about the complexity of our environment and about what kind of future we might have to deal with. Without corona restrictions, Lasse likes to spend his free time in music venues, trying out various types of physical exercise, and exploring urban environments as well as hiking trails. Christina Johannsen, PR Officer
As a PhD candidate at the Department of Biosciences, Christina works to develop quantification methods for therapeutic protein species based on stable isotope labeling, analyzed with LC-MS. Her project is part of the EU funded network “A4B” which is based on different aspects of therapeutic proteins. The position of the PR Officer suits her well not only because she likes to do any kind of creative artworks for events to stand out but also because she enjoys bringing people together. In this position, she hopes to connect with other PhDs and postdocs but also connect you guys with each other. Outside of work or the university, you’ll find this little geek enjoying the outdoors, doing creative stuff or on her Nintendo switch.

Khalisah Zulkefli, PR Officer
PostDoc at the Department of Biosciences, Faculty of Mathematics and Natural Sciences. Khalisah is studying the proteins that are involved in the maturation of immune cells focusing on dendritic cells. Specifically, she is interested in understanding the trafficking machinery and mechanism of interaction of Rab proteins and the cytoskeletal proteins and the effects these components have on the degradation pathways, which allow for the maturation of antigen-presenting cells. During her free time, she enjoys playing the uke, baking, photography and creating illustrations.

Jesus Ballesteros, Representatives Officer
PhD candidate at the Natural History Museum, Faculty of Mathematics and Natural Sciences. Adrian studies the systematics and biodiversity of the Anthericum-Chlorophytum complex. This complex is a group of monocot and geophyte group of plants found throughout Sub-Saharan Africa . His work includes phylogenetic reconstruction of the complex, geographical modeling, biodiversity models and taxon delimitation. This line of research started during his MSc studies where he studied the biodiversity patterns of arctic and boreal vertebrate herbivores at a global scale. He likes to weightlift, hike and play videogames. Vipin Kumar, Representatives Officer
Post-doctoral fellow in computational biology currently working at NCMM (Faculty of Medicine). More specifically Vipin develops algorithms attempting to improve our ability to integrate and interpret various flavours of high-throughput sequencing data. Having had the opportunity to travel across continents through his studies, Vipin has grown to appreciate the value of exchanges among individuals with diverse experiences to convert seemingly elusive problems into fruitful endeavours. In that spirit he aspires to adopt a similar attitude in both his work and activity at UiODoc. Vipin's role at UiODoc focuses on strengthening the relation between our members and their representatives at the different levels of UiO administration.  In his spare time, Vipin enjoys procrastinating on YouTube and getting headaches while reading obscure German philosophy.

Stefanie Falk, former Secretary. Postdoc at the Department of Geosciences, Faculty of Mathematics and Natural Sciences.Stefanie studies the effect of elevated surface ozone concentrations on natural and semi-natural vegetation in northern Scandinavia.Her work includes mainly data analysis (models and observations) and modeling of various kind - from global-scale chemistry transport models via regional-scale chemistry models to process modeling at plant level. After finishing her PhD in Astroparticle Physics with a focus on radiative transfer of UV light in the atmosphere, she went on to study brominated very short-lived ozone depleting substances in the tropical stratosphere as well as the polar boundary layer. She is also member in the board of environmental physics within the German physical society (DPG) and the Sing-, Tanz- und Spielkreise Baden-Württemberg. She likes the arts, dancing, music (listening and playing), painting and sketching, any kind of needle work - but she also enjoys hiking and biking.

Veronica Blihovde, former Treasurer. PhD Candidate at the Department of Biosciences, Faculty of Mathematics and Natural Sciences. Veronica is working on characterising a protein in breast cancer, which has previously only been characterised in prostate cancer. Specifically she is exploring the role and mechanism of this protein in breast cancer cells proliferation, survival and progression by analysing the expression of DNA, RNA and related proteins in human breast cancer cells. She is also involved in the Norwegian Biochemical Society (NBS) in Oslo as a member of the board. She likes gardening, hiking in combination with berry picking and knitting.

Lorenza La Rosa, former Events Officer. PhD Candidate in Classical Archaeology in the Department of Archaeology, Conservation and History. Lorenza studies the production of the Roman ware "terra sigillata italica" and its use of natural resources. She combines technological studies with environmental data to assess how this tableware, symbol of Romanity, impacted the environment with its intensive production. Lorenza has previous experience working in university research projects, excavations, and in public outreach projects in schools and museums. She is an active environmentalist, fond of biking, reading and cooking.

Yasemin Hacioglu, former PR officer. PhD Candidate at the Department of Literature, Area Studies and European Languages. Yasemin studies  poems within late eighteenth-century women's novels. She is working on how the culture of writing poetry is used within novels to explore how emotions and decisions can be composed. The project is part of the 'Literature, Cognition and Emotions' research group. Yasemin has previous experience working with university outreach schemes, and in women’s welfare support within and outside of academia. She is especially interested in welfare, well-being and outreach events and projects.

Yizhou Shen, former SiN Liaison Officer. PhD Candidate at the Department of Chemistry, Center for Materials Science and Nanotechnology. The research interest of Yizhou is to investigating the effects of water vapor and space charge on the surface chemistry of functional oxides. Before moving to Norway, he was involved in Elite Network of Bavaria in Germany. He is particularly interested in the advanced materials related to sustainable energy utilization. Besides, he is in fond of playing guitar, piano and basketball.

E-mail this page
english >
About >

info@uiodoc.no
Responsible for this page